A Christmas Gift by Ruby Jackson has just been released!

A Christmas Gift, Ruby Jackson
Sally Brewer has always wanted to be an actress. When war breaks out and her drama school closes she is sure the dream has ended. She finds a job as general dog’s body at a small theatre but works hard to learn as much as possible. Invited to a London theatre, she buys a beautiful cloak in a second hand shop. Is it the cloak, the valuable ring she finds in the lining, Sebastian, the former child star who rescues her from unpleasantness at the theatre or ‘just Jon’, the enigmatic sailor whose wife had owned the cloak and the ring but Sally’s life changes. As bombs fall on London she works tirelessly to raise the morale of service personnel everywhere but can she herself survive the message that reads, ‘Missing in Action’?

You can find it on Amazon and read about the author here. 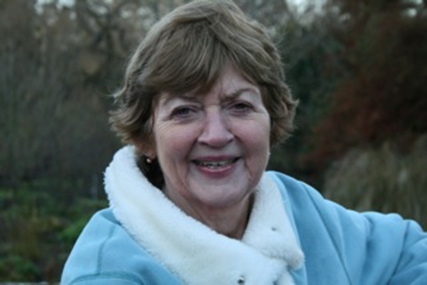 Thank you, Eileen, for taking the time out of your busy schedule to be my guest this month.

You have had a fantastic breadth of life experiences from teaching the children of international politicians and celebrities in the USA to working in Migrant Education. What lasting impressions did this contrast leave you with?
One fact that has remained with me through all my years of teaching is that, no matter the social position of the parents, the wealth or lack of it, education or lack of it, ALL good parents want the best for their children. Another is that poor parents – and I’m not talking finance here – come from every strata of society. I have had extremely wealthy parents leave seriously ill children in hospital while they jetted off to join some celebrity at a ski resort and I have had really poor Mexican parents turn up at my door begging for “Trabajo ahora?” whenever there was a school outing that cost a little money. They didn’t want a hand-out, they wanted to work to earn the money.

What is it about Mexico that appealed to you so much?

I visited Mexico often and studied Spanish language and Mexican music there. I love its fascinating and sometimes sad history. It is incredibly beautiful. The people are proud and they are generous and full of humour and you have just given me ideas for articles!

Would you agree with the observation that despite having lived with the lifestyle of the very privileged, you always seem to have kept your focus on what is important in life – family and reality?

You’re right, I did enjoy some incredible experiences and my upbringing was certainly not among the privileged but one wonderful woman in Washington DC reinforced all my early lessons. I had just met the man who was to become my husband and I wanted to impress him – shallow person that I am – with my ‘new’ family. I was taking him to lunch – to be introduced – and we walked into the house to see the lady of the house on her hands and knees washing a floor.  It turned out that the resident ‘cleaning lady’ wasn’t feeling well and had been sent to bed.

‘But why are you washing the floor?’ I asked.

She looked up at me and laughed. ‘Dirt,’ she said, ‘is no respecter of persons.’

My husband, of course, fell in love with her on the spot.

When did you break away from teaching to develop a career in writing?

Teaching and writing marched together for years. I wrote stories for Sunday School magazines and I wrote reading materials for primary schools. I was able to use knowledge of Native Americans I had gained while living in the US to write something a little different – Bud and the Hunkpapas was a favourite. For a few years I wrote from 4am to 6am but resigned when our younger son went to university.

Are you a very disciplined writer in the way you organise your day?
Organise?  I can already hear the laughter of those who know me.
I am disciplined. If possible I write every day; some days I write all day and well into the evening – that’s research time too. I use a laptop that has no internet because I can’t resist an email pinging in. My husband is learning to cook – our sons and lovely daughters-in-law sent him on a course – and he does one meal a day and he helps with housework – does all the heavy things and brings me a cup of coffee in bed first thing – and so I have 30 mins of ‘fun’ reading.

How and when did your first breakthrough as a published writer occur?
I went to a writing conference at USC where the great Michael Shaara, Clive Cussler, and the editor Charles Block were speakers. A friend typed up part of a Scottish Regency novel I’d been writing – I had even fewer technical skills then – and Charles Block read it. He was waiting outside a lecture room for me on the last day, handed me the script and said, “I think this will go but have chapters one and two change places.”

I had introduced the heroine in chapter two and he advised that the heroine should always be right there in chapter one. We returned to live in Britain that summer; I managed to get an agent – long story and sent her the finished, rewritten manuscript. A few days later she called and said she’d attended a party the evening before and an American editor had asked her about the availability of Scottish Regencies.  She showed her the typescript and it was bought! I looked at it a few years ago and it was rather dire – wouldn’t be published today. I rewrote it, correcting errors, and published it on Amazon!

You were established as a saga writer and then made the bold and successful move to writing romances based around the world of opera and music. What inspired this departure?

I had written children’s books, Regencies, Sagas and serials and I wanted to write contemporaries. I went to an artist chum’s exhibition and found myself thinking – What if all these paintings were of one person? The idea stayed and grew like Topsy and I wrote a book about an artist who loved a tenor – my favourite voice!  It was read by several reputable editors and agents but no one wanted it but almost everyone made sensible points. (I occasionally bump into one or two at an RNA party and we chat perfectly happily!)

At a book launch I found myself standing beside a lovely woman who asked me if I wrote books like those of the superb writer onstage. I said “no” and told her my friend’s publisher had just, that very day, rejected me.

“I didn’t reject you,’ said the woman and gave me her card. “Send it to me and I’ll have a look.’

I dithered for days and eventually rang my friend, telling her I felt badly about, even inadvertently, using her launch to contact a very senior editor. She looked at me and said. “Don’t be stupid; if anyone holds out a hand to you in this business, grab it.”

I grabbed, sent it and received the manuscript back with a “NO” for which she gave her reason. She also told me I really needed a good agent and suggested three. Two had already rejected me but I had not heard of the third and so I had one more go.

The agent accepted me as a client, and, with her guidance, I rewrote a few scenes. The agent, the brilliant Theresa Chris, sent the manuscript to auction. It went for an amazing amount of money and was then bought by several foreign publishers. 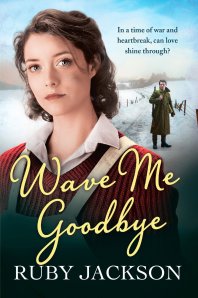 Last year, ‘Wave me Goodbye’ was published under the name of Ruby Jackson, which I understand is the first of a series of novels ‘Churchill’s Angels’.  Please tell us something about this new project?
I suppose, like many writers, after five best-selling books, I fell out of favour. Theresa stayed with me, encouraging me, advising me.  A few years ago, she asked if I would like to revisit WW11 and after much thought, I said yes. I did not know, of course, that  an editor at Harper Collins had conceived the idea of publishing a series of books about the courageous women who did everything from catching rats to ferrying Spitfires; the women she calls Churchill’s Angels.  Using the pseudonym, Ruby Jackson, I have now written four books; two have been published so far.  It’s been an enormous privilege. I’ve met land girls, pilots, nurses, etcetera and been awed by every one of them. Their stories need no exaggeration – they were quite simply – superb.

You obviously love historical fiction and research your chosen topic thoroughly. What advice would you give to anyone who was considering writing a historical novel?
Advice would depend on which era and which country but obviously I’d say, find out as much as you possibly can about the person the time and the place. Read everything, especially newspapers of the time, and don’t be afraid to ask questions. Archivists and librarians are great sources and remember there are archivists in famous department stores, in grand hotels and in universities.  They know what you don’t know you don’t know!

What is next for Eileen?

I have no idea; my head is spinning – that way, or that way but I did visit a conductor friend at the Royal Opera House earlier this year. He has been keeping me accurate about conducting and conductors for several years as I have an idea. He asked me about progress.

‘I’m afraid, for the past four years, the poor man has been standing on a rock looking out to sea.’

He shrugged. ‘Well, there are worse places for a conductor to stand.’

Now, wouldn’t you want to discover the worse places?!