When did you first realise that you wanted to be an author?
I did things rather back to front. I didn’t consciously start out to be a writer. One Christmas – back in the day – there was a short story writing competition in Woman’s Own. On Christmas Day evening, my family were all glued to the TV – something I don’t get a huge lot of pleasure from as I am deaf. So I thought I’d have a go at the short story competition for something to do. To my utter amazement my short story was short-listed  and published. And I was paid for it. The old cash registers behind my eyes started to ring and I thought, hey, I could make money from all the ‘stuff’ that goes around in my mind…

Your stories have sold internationally. How many have you had published to date?
I’ve lost count of the exact number of short stories I’ve had published but it is definitely 300+ now. I’ve also had a story broadcast on radio – the irony of that not lost on me.

Writing short stories and longer fiction involve two very different disciplines. What attracted you to short fiction initially, and how much of a challenge was it making the switch to longer fiction?
Short fiction is just that – short. 750 word stories are quite popular with some magazine editors. I tend to write 1000 word or 2000 word stories as they’re the lengths that tend to fit into most magazine slots. When working on a short story I don’t have to think too much about viewpoints – I only ever write one character’s viewpoint into a short story. I don’t have to have sub-plots, and foreshadowing is something that – depending on the story – doesn’t raise its head much. So they are much quicker to write. When I first started writing I had two teenage children at home, a husband (still got him!) and a part-time job as well as ageing parents and parents-in-law to be doing things for. Short story writing was easier to fit in around all that. Writing longer fiction – 80,000 words or so – seemed a natural progression for me once I had more time to write it. The same premise of ‘person, problem and plot’, with a ‘beginning, middle and an end’, is the same for short stories and novels. The only difference is the time it takes to tell the story.

Your novel, the first of a trilogy, ‘To Turn Full Circle’ is set in your beautiful home county of Devon. Please tell us something about the inspiration behind it?
The seeds of To Turn Full Circle were sown when I was helping my husband research some family history. We discovered that his great uncle, George, had fished out of Brixham. George had had two trawlers. One of them was lost to the sea in a storm (although with no loss of life) and George had a bad accident on board the other one which meant he had to come off the sea and lost his livelihood. He had to move his wife and daughter back in with his mother. I had a ‘What If’ moment! What if it wasn’t a man who had lost his home because of circumstances, but a young girl? And ‘What If’ the sea still controlled her struggle to survive? And so, To Turn Full Circle was born.
When you begin a new project does your initial idea start with a character, situation, place or theme or does it vary?
For me a story always starts with an emotion or a feeling – something deep inside my main character. In To Turn Full Circle’s story it was Emma’s determination to survive which drives the story.

You have two more novels to write to complete this trilogy. What do you see as the next challenge for Linda Mitchelmore?
Writing the next two books is keeping me busy at the moment. I do, however, have a contemporary novel under consideration – the heroine is older than Emma. The feeling driving this story – tentatively called Red is for Rubies – is regret. Most of us have them and in Red is for Rubies, my hero and heroine have lived – apart – with their own regrets for a long time. Will they get a chance to redeem themselves?

Also, I have now signed a contract with Choc Lit for a novella – Hope For Hannah. It will be an e-book initially and out in the close future.

My thanks for a very insightful interview, Linda. 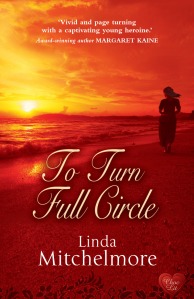