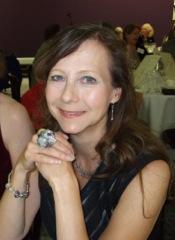 I have the pleasure of welcoming novelist Henriette Gyland as my guest of the month. Her second novel, The Elephant Girl is due to be published on the 7th July 2013.

I read in a recent interview that you have an ‘ideas box’. How and when did this begin?

I’ve had this box for years. I used to toss anything in there – newspaper clippings, notes from talks, overheard conversations etc. Even conversations I’d “heard” in my own head. I then discovered that I had real problems deciphering my own reasons for keeping a particular item and ended up throwing stuff away. Now I carefully date the note or clipping, and scribble my reasons in the margin, whether it’s a short story idea or an idea for a longer piece. I also bundle notes together if they relate to the same idea or theme. So there’s a certain method now to what used to be just madness!

How would you describe your work?

Some genres are easier to pin down than others, but mine is tricky because it straddles two of them – crime and romance. Romantic suspense or romance mystery explains it quite well, but I also add a hefty dose of difficult family or personal issues, social topics, political comment. The Elephant Girl is a very loose reworking of Cinderella, which is a fairy tale with a LOT of family stuff going on in it!

What has been your proudest or most memorable moment of your career to date?

There have been a few – being awarded the Katie Fforde Bursary, winning the New Talent Award at the Festival of Romance – but I think the absolute proudest moment to date was when my first novel Up Close was heralded as “Nora Roberts territory” by Sarah Broadhurst in The Bookseller. I’m a huge fan of Nora Roberts, so this was really the best kind of compliment.

I love the cover design of The Elephant Girl. What inspired the idea for this intriguing novel? Did it start by rummaging through your ideas box?

The idea is based on a real-life horrific murder, witnessed by the victim’s young child, and also the old maxim that elephants never forget anything, hence the title. The pendant on the cover is one the main character, Helen, inherits from her dead mother. This story didn’t come from the Ideas Box because I wrote it very shortly after the real crime had happened, and although in some ways I feel a bit strange about creating a story out of another person’s tragedy, I think as writers we just can’t help ourselves sometimes.

Is there one piece of advice that you were given as a new writer which you consider helped you to make the breakthrough as a writer?

When I met the lovely Katie Fforde, about ten years ago, she told me to “keep the faith”. And I she was right. Perseverance and the belief that one day you will get published is the only way to survive the numerous rejections leading up to it.

What do you choose to read to relax?

I’ve just finished Scarlet, the second in a series by Marissa Meyer and now have to wait until 2014 for the next one (sigh). I’m also hoping that C J Sansom will write another Tudor mystery novel in his Shardlake series, but in the meantime I’ve started reading Blackout by my favourite writer, the American sci-fi author Connie Willis. As always, I find every sentence of hers a genuine delight.

What is next for Henriette?

My next novel is a complete departure from anything I’ve written so far. It’s a swash-buckling historical tale set in the Georgian period, with highwaymen, a spirited heroine, and a mystery at its core. Well, mystery is my trademark, isn’t it?

My thanks for being my guest. I wish you every further success with your fascinating novels.

7 thoughts on “An interview with Henriette Gyland”