In November 2015 I interviewed Sally Bridgewater, Creative Writing Courses & Competitions Coordinator for Writing Magazine, who was about to embark on an extreme writing challenge of hitting the 50,000 word target for the NaNoWriMo Challenge – but in one day!

I thought I’d catch up with Sally and see what has happened since. 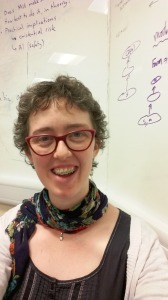 Hi, Sally, welcome back.  Can you share with us what has happened as a result of completing the challenge?

Doing the twenty-four hour wordathon was a fun challenge, but I wouldn’t class it as life-changing. I did really appreciate getting the chance to write a piece about it in the Writing Magazine, which is my first proper published article. It did really help me get the rest of my novel draft done back in November 2015, and getting a full draft down on paper gave me a lot more confidence that I really will finish this novel one day.
Have you submitted the finished draft yet?
Nowhere near! I took a break after NaNoWriMo in 2015 – one of the downsides of taking on extreme challenges is that afterwards you usually feel in need of an extreme rest. So I only picked my novel back up in April 2016, when I started world-building and generally trying to re-plot the whole thing. I just aimed for twice a week as I’ve been pretty busy with other things, and that gave me a good stretch of steady progress on it over the summer.
Believe it or not, I have not yet gone back and re-read what I wrote in the wordathon or in the rest of that November – as soon as I started working on the novel again I knew I’d be changing so much that there wasn’t too much point in working from the draft outwards. I still don’t see it as a waste of time though – doing that really rough draft gave me a rough sense of the characters, the world, the plot, and most especially got me far enough to imagine what would happen at the end. All of that was crucial, and as I am a first-time novelist I don’t think there was any other way for me to work out a full plot from my first ideas. I’m hoping with my second or third book I won’t have to write completely discarded drafts though!
I hope not. However, I can see how completing this punishing challenge has taught you so much and given you a tangible first draft to build upon.
In November 2016 I wanted to do NaNoWriMo again, of course, and I was aiming for a complete rewrite of the novel with my new plot. Even though I was the most prepared I’ve ever been, with a spreadsheet of all the scenes I was planning, unfortunately life got in the way. I finally reached the top of the waiting list for a much-delayed jaw surgery during November so I had to give that priority. I thought lying on the sofa recovering would give me lots of time to write, but it turns out that healing is a lot more tiring than it looks! I didn’t want to push myself while I was obviously not at full health, so I’ve not given myself a hard time about it.
I hope you are fully recovered now. What are your writing goals for 2017?
Get this second draft finished! I have recommitted to writing 1000 words a day, and it’s really working pretty well at the moment. I use the Jotterpad app on my phone to write on the bus on my way to and from work, and I am genuinely surprised how much easier I find it to do that than to carve out a chunk of time to sit at my computer – somehow that just feels more like Hard Work. I am using all the psychology tricks I can to make it easier, such as congratulating myself just for making the three short taps it takes to open the Jotterpad on my phone. I know that’s all I have to do really, and then once it’s actually in front of me it’s much easier to contemplate doing the actual writing.
I am also using a site called Beeminder.com to keep me on track – it makes a graph of a goal you want to achieve, so in my case I have one tracking the number of ‘days I worked on my main fiction project’ and I’ve set my target as only three days a week. This is because if you fall off the line on the graph of how many things you said you’d do, then Beeminder charges your credit card an ever-increasing amount of money. It is scarily effective at keeping you motivated, I’d seriously recommend it for anything you’re stuck on.
I’ve then got a great writing project I’m looking forward to in April – my friend Tonks and I (who helped with the Wordathon in the first place) have agreed to do ‘Camp NaNoWriMo’ and make it Editing Month. The real twist is that I will edit her first draft and she will edit mine. It’s a little scary but we trust each other and it will be so much easier seeing how to improve someone else’s work rather than your own. So that gives me a deadline to get the second draft done!
If anyone would like to follow developments, they can like my Facebook page at www.facebook.com/SallyBridgewater. I could do with your support!
I wish you a very happy, healthy and successful 2017!