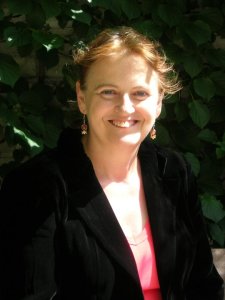 I am excited to welcome the lovely Trisha Ashley, an award-winning and best-selling author of humorous romantic fiction.

How much have your entertaining novels been influenced by your own studies, hobbies and work experience?

There are elements of my interests and experiences woven in all of them, of course, but like most novelists I tend to use turning points and situations in my own life as jumping off points to explore new directions my characters can take – because after all, they’re not me and they would do things very differently.  They constantly surprise me.

There is, of course, rather a lot about food in my books and all the research has taken its toll on my figure – but then, you have to suffer for your art.   I also love animals and gardens – especially roses – and often, too, my novels reveal the enduring power of good friendships and the supporting love of families, however dysfunctional they may at first appear.

I’ve had a series of part time jobs over the years to support my writing and I think probably the seasonal work for the National Trust was the most useful.  For a few years I spent six days a week either in the draughty front hall of a large gloomy mansion, or in a little wooden hut at the entrance to the lovely Bodnant Garden in North Wales.  Now, those gardens were really inspiring and I was lucky enough to be there when a new young (and handsome) head gardener, Troy Scott Smith, had just taken over and was slowly revitalising it.  I think you can date my passions for roses, mazes and knot gardens to this time…

But all of life’s experiences, good or bad, can be composted down and used to grow something fresh and new: nothing need be wasted.

When did the Muse enter your life? I hope he gets on with Dog.

I don’t think I can do better than to quote the update I put at the top of my quarterly newsletters for new subscribers:

The plot so far: Except when she is occasionally let out to enjoy a couple of days of frenetic partying in London, or to give a talk, Trisha lives in beautiful North Wales, together with the neurotic Border Collie foisted onto her by her student son and an equally neurotic but also vain, bad-tempered and chancy Muse.  Muse, whose first name is Lucifer, slipped into her head and took up residence while she was reading Paradise Lost at school and refuses to leave.  He is male, steely-blue, wears a lot of leather, is winged, has talons (so that’s where her blue nail varnish went, then) and is devilishly handsome, if you like that kind of thing.  He only eats words, but gets through a lot of Leather Food and Trisha is starting to suspect that he does more with it than just rub it into his wings…

Lately, Muse has been writing a hiss-and-tell account of his life with Trisha, called The Muse Report, though due to the fact that he eats his words almost as fast as he writes them, it could be quite some time before this appears in print.

Muse takes little notice of Dog, except to eye the name tag on his collar when hungry…

Meeting your agent, Judith Murdoch, was a major turning point in your career.  What key advice would you offer to, as yet, unpublished authors?

There’s too much temptation now to rush out your first novel yourself as an e-book, so if you take that route I’d advise you to have your novel independently edited, and consider the constructive criticism you receive very carefully.  You want your novel to be perfect and whole, not some poor, half-formed creature, and with a first novel you aren’t going to spot what’s wrong with it yourself.

If you’re lucky enough to be taken on by an agent or publisher, of course, they will tell you what’s wrong with it and being able to accept and work with constructive criticism is something you need to embrace if you’re taking writing seriously.

Are you a very planned and disciplined writer, plotting an outline in advance or do you start with a scene, character or situation and go from there?

I am character driven and, since I write in first person, must get to understand my heroine and her background first. Then I put her into a situation and see where she goes, and the book unrolls before me as I write like a magic carpet.  I don’t know where we’re going until we get there.

You have achieved success as a writer despite having macular degeneration. For those unfamiliar with the condition, would you  please share with us how you have worked around this?

I have had myopic macular degeneration and very poor eyesight (minus 20) for many years, but the MD has been getting increasingly worse recently.  Macular degeneration means that blind patches increasingly appear on your retina and although I automatically focus around them, when tired that gets harder to do and my vision generally blurs.

I have little night sight either, so tend to fall off kerbs etc and have been known to try and flag down any dark and vaguely taxi-shaped vehicle in London at night…

I am exploring new ways of writing at the moment in case I ever get to the point where I can’t see the screen at all, but this isn’t easy since I’ve been touch typing my books since I was fifteen and made the transition to word processors and then computers as soon as they appeared.

At the moment, I write on screen in large print, but still have lots of room to increase the font size if necessary, so it’s okay.  I print everything out to work on.  But then, I’ve always needed to see my words on paper before they become real.

Please tell us about your new novel?

Wish Upon a Star will be released on November 7th and has a Sticklepond setting, the village in West Lancashire where some of my other books are set.  It’s very much about following your star, wherever it may lead you and however hard the going gets.

Single mum Cally’s life revolves around her little girl, Stella, who has serious health problems and when her condition suddenly worsens, they move in with her mother in the remote village of Sticklepond, while she tries to raise enough money to take Stella to America for a potentially life-saving operation.

Cally only realises quite how tough it’s been shouldering everything alone when all the villagers – and especially laid-back and charming baker Jago – rally round to help.  All Cally wants for Christmas is a miracle to save Stella and with Jago’s help she may yet discover that all the best presents aren’t always found under the Christmas tree…

What is next for Trisha Ashley?

I’m very happy to say that next year Avon will be doing a new edition of one of my long out of print novels, Every Woman for Herself.  I know you shouldn’t have favourites among your children, but I have to admit that this book is the closest to my heart.  It’s set in Yorkshire, where the Rhymer family, Emily, Charlotte, Anne and Branwell (the result of a failed attempt by their father to recreate the Bronte family situation) slowly return home, one by one to the haven of Upvale – only to find that things are about to change, forever.

Every Woman for Herself was voted one of the three best romantic novels of the last fifty years in a reader poll, which was a truly wonderful moment, and I’m constantly being asked by readers where they can buy a copy, so I’m delighted it will soon be out again in paperback and e-book formats.  I’m adding a couple of new recipes to the end, too and it will also, of course, have a lovely new cover.

Thank you so much for having me on the blog, Valerie, and I wish everyone lots of very happy reading! 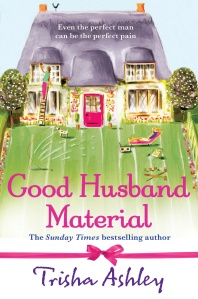 James is everything Tish has ever wanted in a husband – she’s married a man who even her mother approves of. He’s handsome, dependable, and will make an excellent father – unlike Tish’s first love, the disreputable Fergal. Her teenage sweetheart abandoned her for a music career and now lives a typical celebrity lifestyle. Fergal broke her heart – James helped mend it.

Now, they’ve bought a cottage in the country. The next step – kids and a lifetime of domestic bliss. Well, that’s the plan. And even if James has a slight tendency to view the village pub as a second home, their relationship is still in pretty good shape after seven years of marriage. So why is marriage to Mr Right making her long for Mr Wrong?

3 thoughts on “An interview with Trisha Ashley”